The Deviceplane CLI can be used to manage the releases in applications, SSH into devices in a project and used to help manage your projects and applications.

The Deviceplane CLI enables you to perform most actions available in the UI. With the CLI, you can quickly deploy, troubleshoot, and dig into issues via your terminal. It also offers output in JSON and YAML, so you can use it to write scripted workflows.

A great example of CLI usage is integrating it with your existing CI/CD system, to deploy new releases directly into Deviceplane.

The CLI can be used to manage the following: 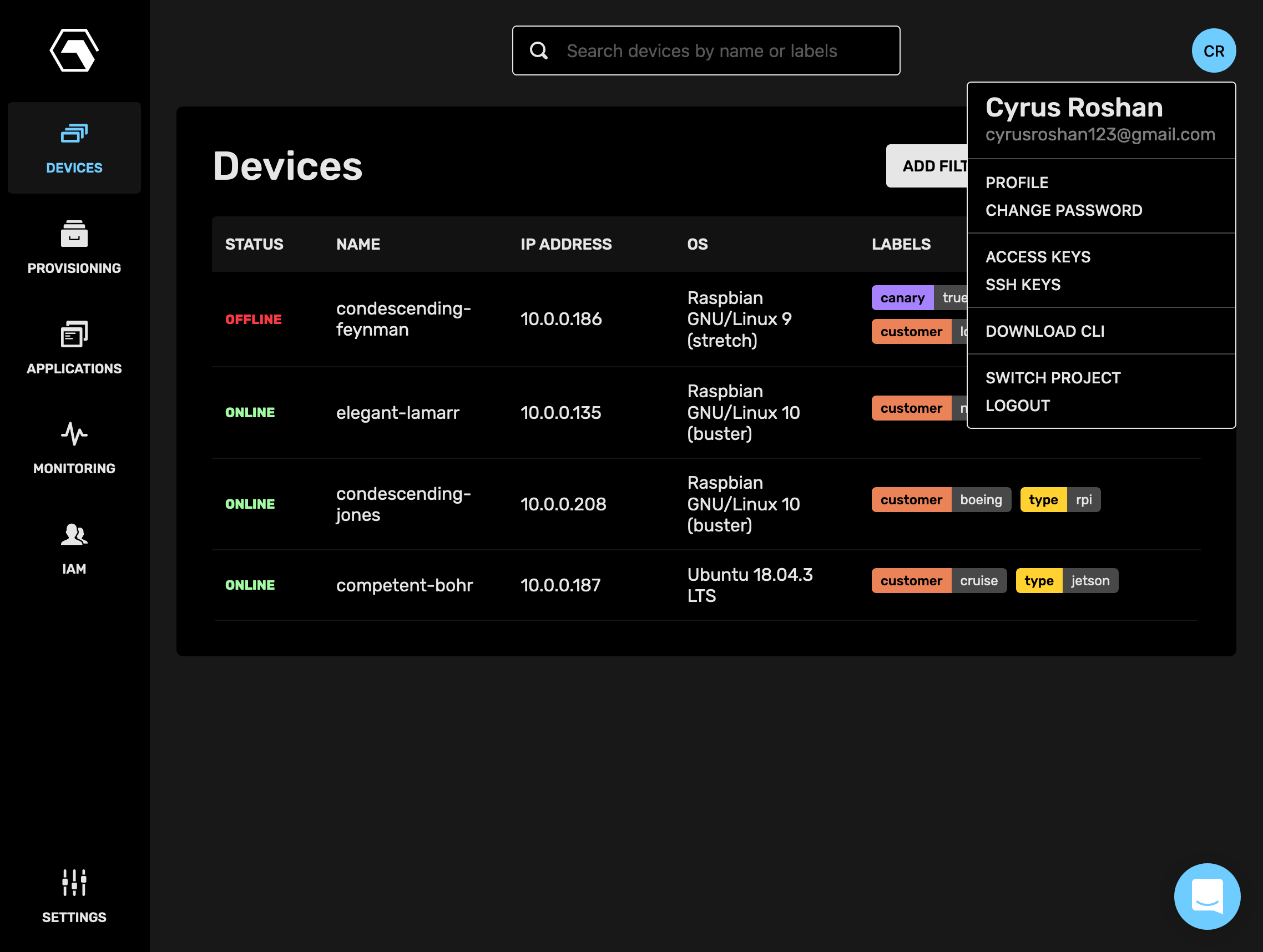 Now, you should be able to run deviceplane, and see the help output. 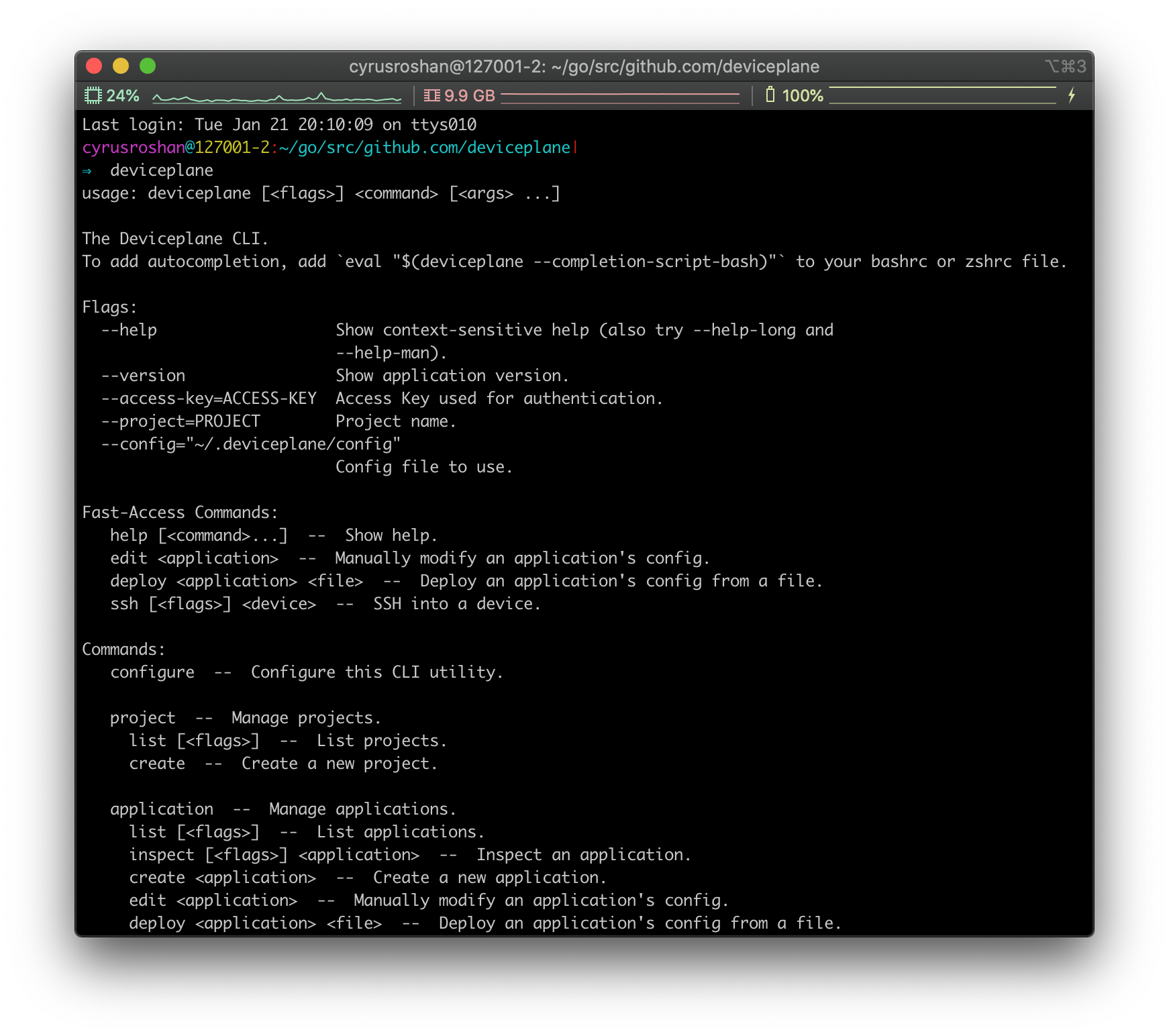 This follows the normal scheduling rules that you've set for the application you're deploying.

When creating the yaml file for the release, your configuration options can contain environment variables so that the file will be use the variable values from the shell environment running the deviceplane deploy command. Environment interpolation is only supported in the CLI and not supported in config file the UI.

During deployment, if there are missing environment variables, the CLI will error out and list which variables are missing.

Only $VALUE and ${VALUE} syntax are supported. Other typical shell syntax options are not supported. If your configuration needs a dollar sign, you must use a $$ so that it is not attempted to be interpolated.

Putting $$ in front of any word prevents any interpolation to occur.

An easy way to update an existing release is to edit it using the CLI. Similar to deploying releases, the project and application can be set as environment variables or as options in the command.

When running deviceplane edit, the CLI pulls up the current config of the application into an editor. After the config is saved and exited, it is automatically deployed into the application.

To SSH into a device, simply run deviceplane ssh $DEVICE_NAME. For more information, look at the SSH docs, or look at command scripting docs to see examples of using this in custom scripts.

Listing resources can also be done in the CLI using deviceplane $RESOURCE_TYPE list. Here, we list all devices in our project:

In the case of devices specifically, filters can also be applied with the --filter flag (more info with deviceplane device list help): 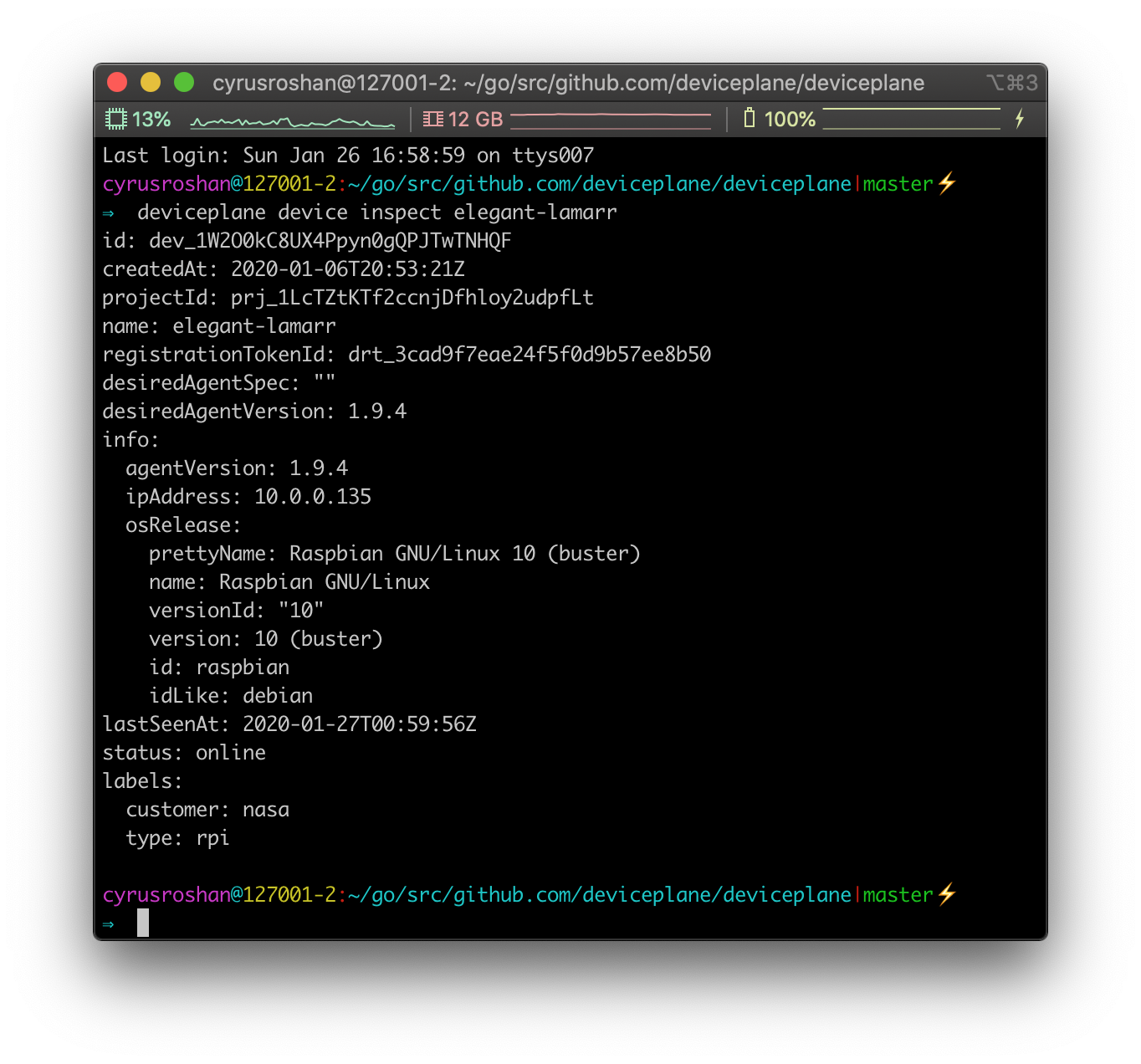 Note that for command scripting and other use cases, the output of the CLI can be configured using the -o or --output flag. 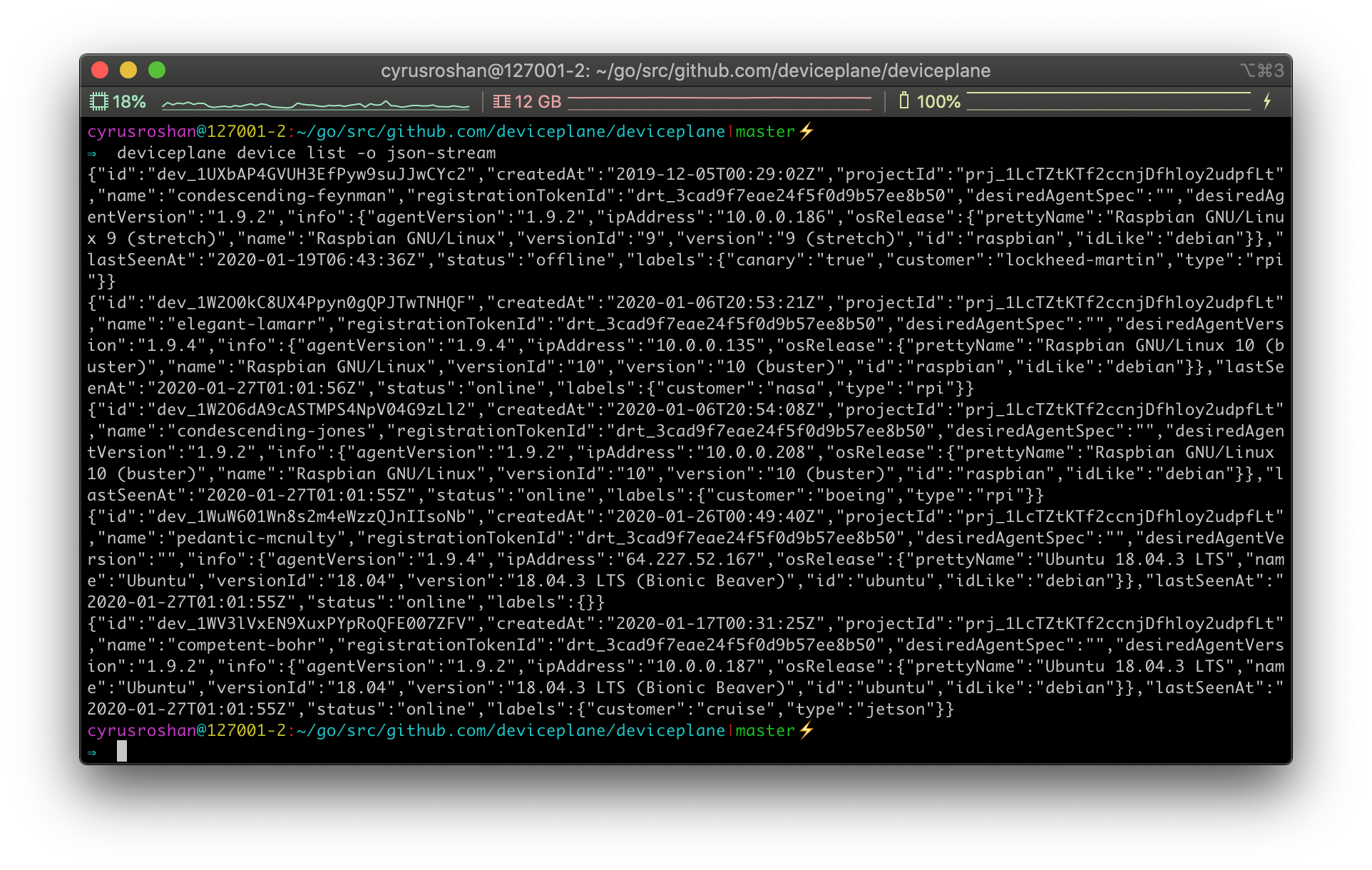 For inspecting individual resources, the CLI supports yaml and json output. Here, we use json-stream output on our device list: 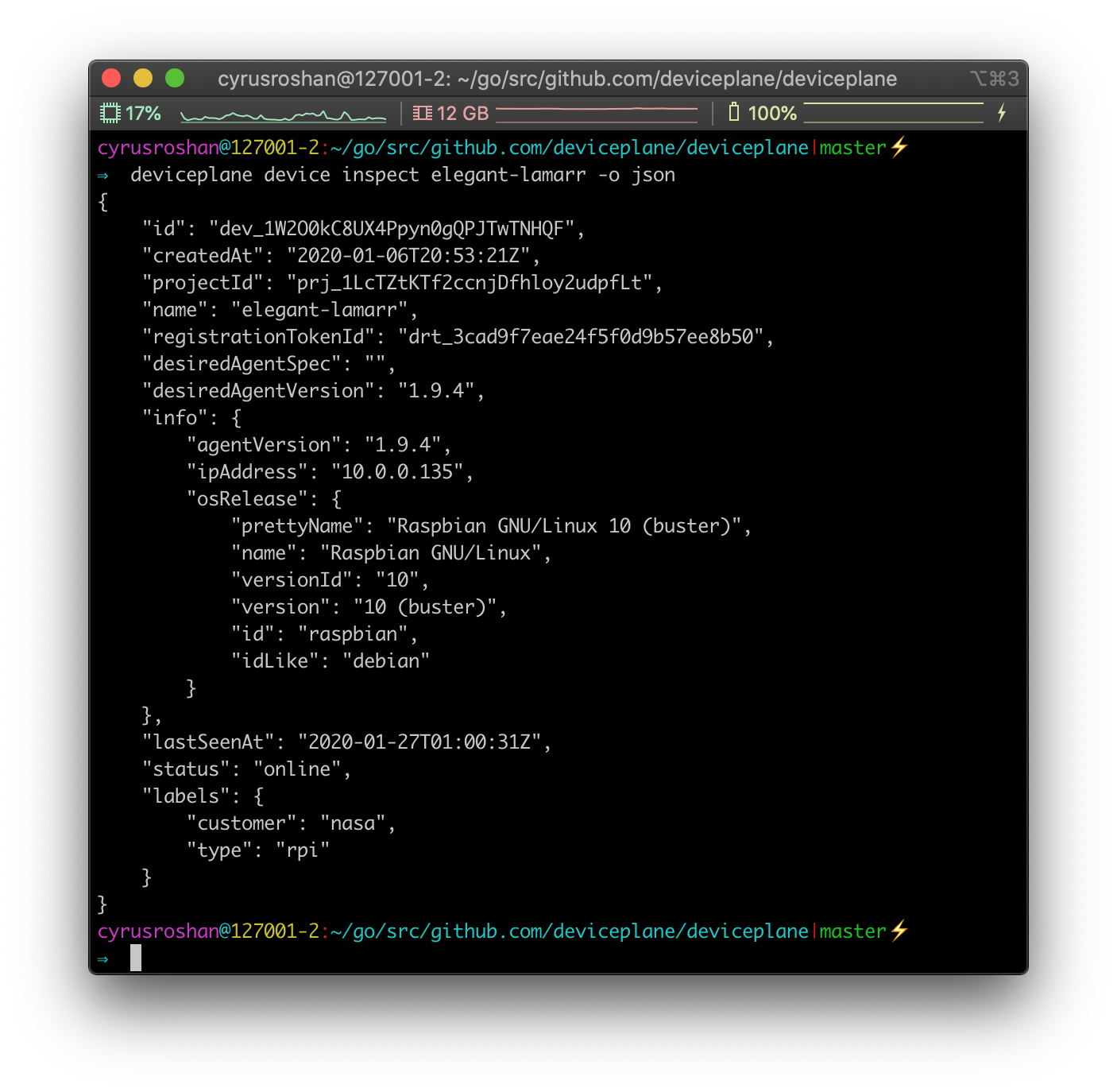 The CLI can also view raw metrics in realtime from the device of your choice. To view device metrics, run deviceplane metrics device $DEVICE_NAME, like so: 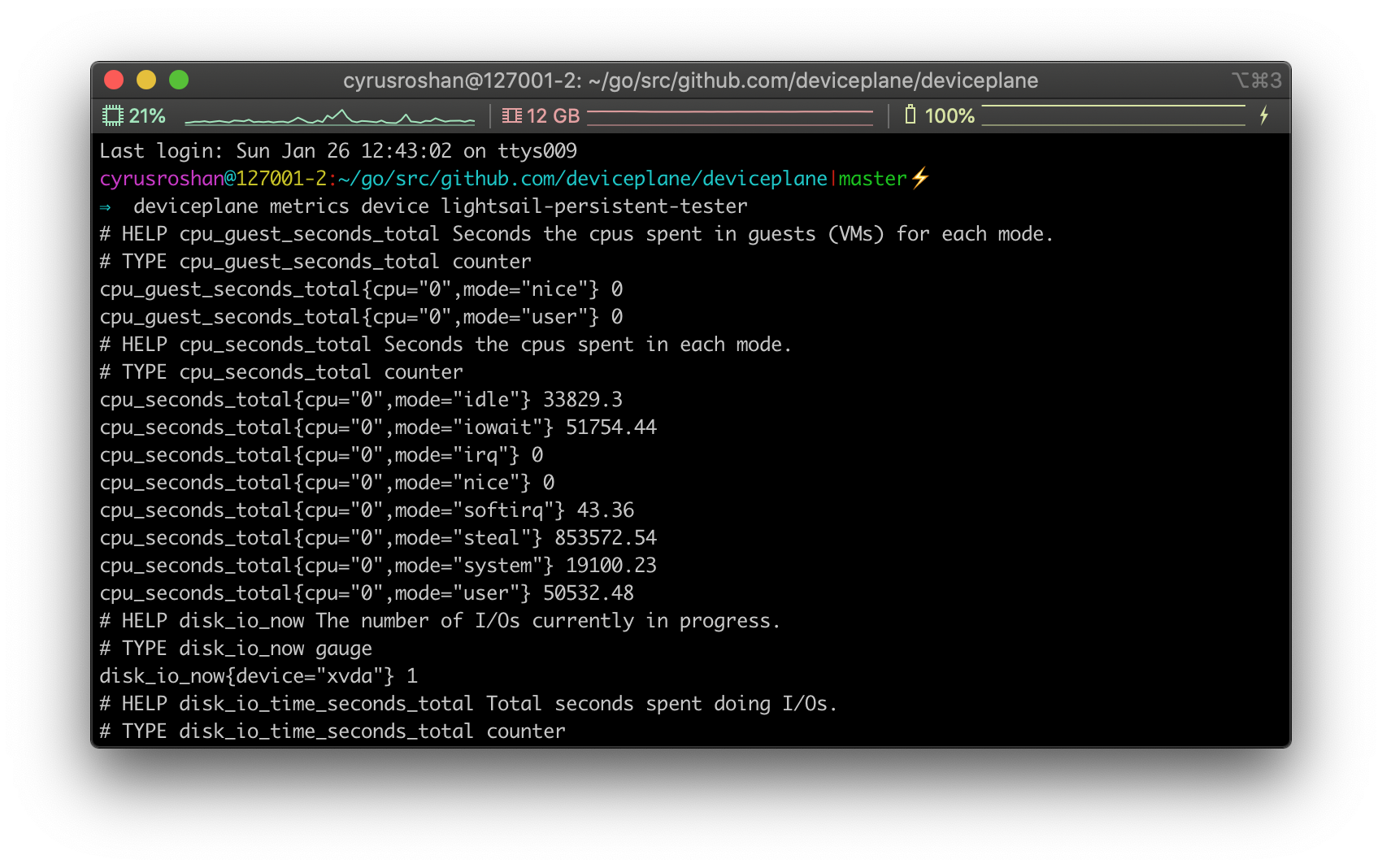 And to view service metrics on an application's service running on a device, run deviceplane metrics service $APPLICATION_NAME $SERVICE_NAME $DEVICE_NAME. We're inspecting the demo application's demo service, on device elegant-lamarr in this example: 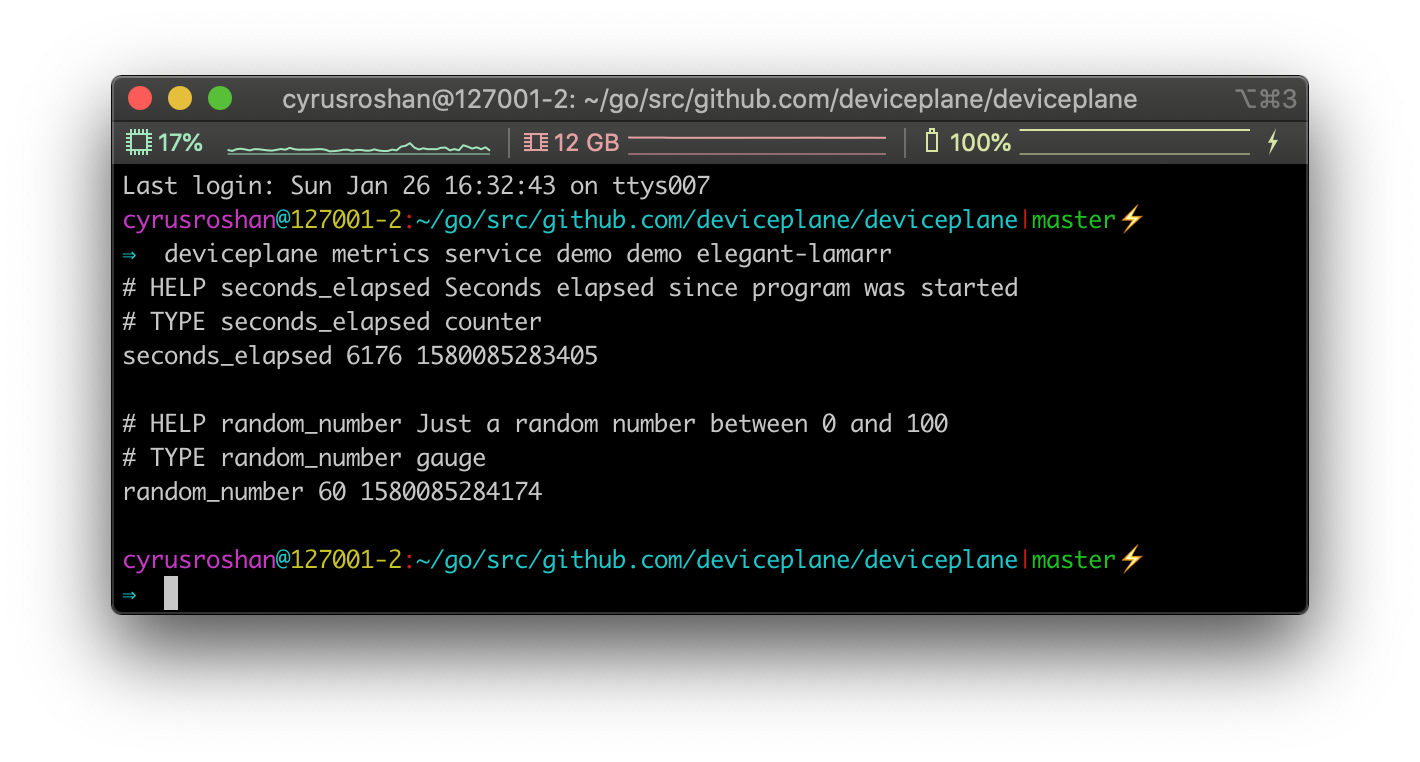 These metrics are raw metrics fetched in realtime, without filtering, shown in Prometheus format. To learn more, see the monitoring docs.

This allows you to autocomplete commands, as well as application, service, and device names, by pressing the tab key.